Warning: count(): Parameter must be an array or an object that implements Countable in /www/webvol29/06/en16crj248qcyuh/ladislaushoratius.com/public_html/wp-includes/post-template.php on line 316

Why do women waste the time of men? If I were Esther Vilar I might have many harsh words to say about this. But I am not Vilar, I just want to mention something that goes on all the time, and that steals our (mens´) time.

Suppose that I am courting a woman, or just showing her a general interest. “Would you like to drink a cup of herbal tea with me, visit a lecture or go to the cinema?”

She answers: “I don´t know, let me think about it.”

You feel generous so you say: “Sure, give it a think.”

Next time you meet the lady you ask her again, and she gives the same reply: “I haven´t really given it a thought, been very busy. Let me think about it.”

Sure, you say again, feeling somewhat less generous this time. But you are a gentleman after all,  and you don´t want to put pressure on the weaker sex, right?

And we don´t have to talk about courting either. “Could I take some portraits of you, I need to practice on people?” the amateur photographer  asks.

Same reply: “Let me think about it.”

What is it with women, why is their cerebral tempo so damned slow?

The answer is, very probably, that it isn´t. They just — for some reason — avoid the straightforward “no”. They don´t want to answer in the negative.

I don´t know, probably it has to do with many factors. Upbringing, mothers´ advice, maybe the word “no” sounds too harsh (I feel myself that there is something very negative about it).

And maybe, heaven forbid, they like to control men, keep them on tenterhooks. I guess it feels good to receive sustained male attention without having to give anything back, more than “”I don´t know, let me think about it…” 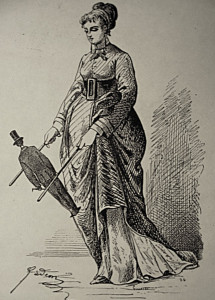 Actually the lady is not slow at all; in very many cases she knows the answer right away, the very second the question is put to her. No, she is not going to drink herbal tea with us, go to a lecture with us or be photographed by us.

But by not saying so she wastes our time, and also gets some kind of feminine power out of the situation.

— It is not always thus. Some years ago when I was arranging a lot of musical salons I asked Lina, a very charming and slightly “trulsig” school girl, if she wanted to come and listen to my concert.

No, she said, without blinking, but also without frowning or grimacing. It was a totally honest, simple answer. She wasn´t coming to my salon and that was that. “Straight tubes” as they say in Sweden.

Of course I regretted this and even felt a bit hurt. But mainly I was charmed by her girlish honesty; the answer was “no” and she wasn´t going to waste my time by asking for extra time to think it over.

Why I am retelling this? Because it is so unusual, so against the grain!

Maybe, possibly, she will grow up to be a woman who wastes the time of men, but hopefully not. Of course a cynic might say that she probably has a diagnosis.

Well, what a charming one in that case!

The answer “I don´t know, let me think about it” is given to a whole spectrum of questions, from “Would you like a chewing gum?” to “Do you love me?”.

And many of us men haven´t figured out that that answer really means “No, but I like your attention, so just keep it coming”. We are rigorously told that a “no” means no, but are kept in the dark about “maybe” also meaning no. (I guess we should feel lucky that sometime, somewhere there is a “yes”.)

And to answer nothing — neither yes or no –to the second question (Do you love me?) has about the same meaning: “I don´t think so, probably not… But don´t give up, keep hoping!”

As I said, Esther Vilar doubtless has a much harsher analysis. I dare not think about it. Being somewhat of a troubadour I want to retain a bit of my innocent, foolish, courtly attitude vis a vis women, at least a little longer.