It is quite rare to bump into the same person twice in a city of 1.7 million inhabitants. Especially in this way.

I am drinking a milkshake in a doughnut place. The best place is by the window, that way I can watch life flow by.

Suddenly a girl on the other side of the glass stops and waves to me. She points to her camera, I nod, and she “shoots” me. My weapon is close by so I “shoot” back at her. A peaceful duel. 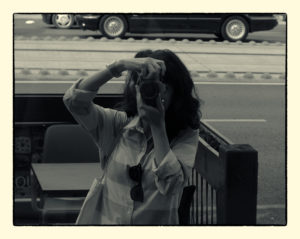 I didn´t really catch her face but it was an enjoyable little episode in the life of a gentleman photographer.

A week later I am sitting and drinking tea at a place without doughnuts. This time there is no window between me and the human lava flow; I am in the middle of it.

A girl comes up to my table, opens a thick envelope, takes out a contact sheet and points at it: “That´s you.”

Ah, that´s her, my shooter! What a coincidence in a big city. Or fate? Being familiar with The Love for Three Oranges I don´t let her leave right away. I “shoot” her again, this time with a better camera.

Now she has a face, a beautiful one. 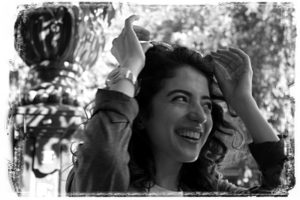 And I say to myself, this is what photography should be like.

One of my favorite hangouts has a bar pianist. Unfortunately, because even when these pianists are good (and some of the magyar ones are great), they disturb the air waves, the silence.

This particular pianist has the bad habit of not breathing. I mean that between one song and the next there is almost no pause. He has the interesting opportunity to make both music and silence golden, so to say; this is one thing that a good bar or cafe musician can do.

But to do this, one has to breathe. In and out, music and silence, silence and music. That way both the break after a few songs, and the new song after a short break, feel refreshing and welcome.

Playing 8-10 songs in a row without a break, well, that only makes the silence feel refreshing.

PS: I played piano myself for some years at Vetekatten in Stockholm so I know about breathing exercises.

We have a strange situation in the world today. If our product is material — bread, cars, telephones or even creating a new hairstyle — we can always make a living and make money.

If our product is more subtle (poems, music, philosophy, dance) making money is harder. Many people think music and philosophy should be free. They might say “philosophy is priceless and invaluable!” (ovärderlig) but in practice this often means “worthless” (värdelös).

This reminds me of what is written on the gravestone of romantic poet John Keats: Here lies One whose Name was writ in Water. That´s how it is. We artists write in matter that vanishes. Very immaterial, very real, very airy… 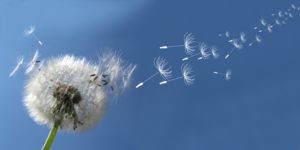 This is the beautiful grave of Keats in Rome. 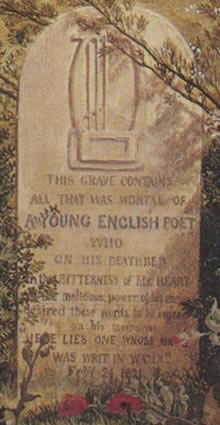 A bit of history: In the past affluent individuals with an understanding of the value of art – and the plight of the artist — often become patrons. Haydn, Tchaikovsky and Wagner are three well known composers who were helped by patrons. And Horace (Horatius) of course was supported by Maecenas, who came to personify the high-minded benefactor.

But aristocracy is not what it was, and patronage vanished at the horizon for a long time. It seems to be doing a kind of comeback now. Not through aristocrats this time but through ordinary (= poorer) folks who also understand the plight of the artist. Folks who are prepared to pay not just for bread and mobile-phones but perhaps even for poems!

I recently discovered a web site that carries on the old patronage idea. It is fittingly called Patreon and I suggest that you check it out. You might find a contemporary Keats there, maybe even make his life less bitter by supporting his “writings in air”.

PS: My first project on Patreon was the online magazine Headwind, closely followed by Partyology.

What´s up in Budapest? 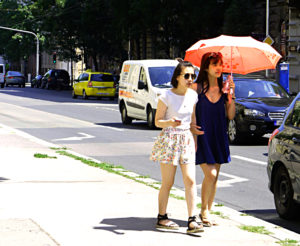 And what time it is?

It´s a quarter to cake. 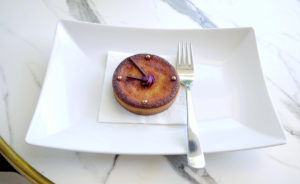 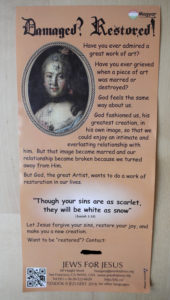 “Have you ever grieved when a piece or art was marred or destroyed?” Frankly I believe very few of us have.

“God feels the same way about us.” Well, at least one guy cares.

And look at the bottom. Address: 60 Haight street, San Francisco! The freewheeling spirit lives on….

After-cake is followed by opera. Which opera? Mine, of course. 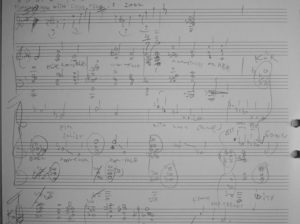 Skeptic = to be absolutely convinced of one´s  own infallibility. 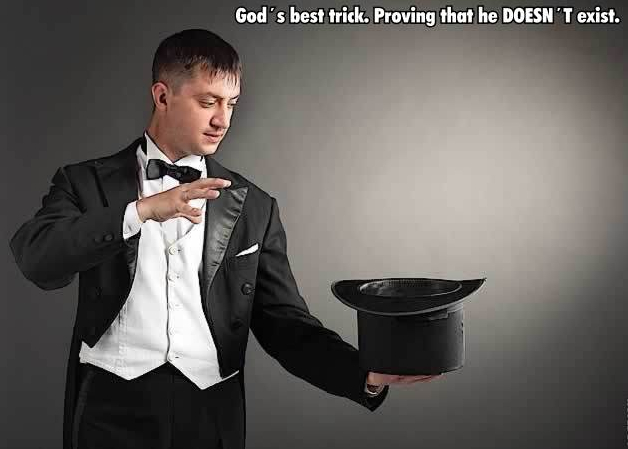 A great trick, almost in the Sherlock Holmes league.

How hard can it be to call a spade a spade? Very hard, it seems. Especially for Americans.

The fact that “adult movies” and “adult magazines” are seen and read by young people who cannot be called adult don´t seem to matter.

Adult is one position, or role, in the thinking of Eric Berne, whose “Games People Play” I just discovered, and much enjoy. Eric was American, and I have met wonderful adult people in America, as well as impressive Americans in Europe.  So the general (?) rule sure has exceptions. (I sometimes even suspect that it is easier to find real adult people in the US than here. Maybe strong stupid general rules create exceptional exceptions.)

Anyway. Berne contrast the Adult with the Child and the Parent. (All these are inside us.) I think one could call it grown-up as well.

A grown-up is more and more separated from his parents. That happens automatically with time, but does not automatically mean that we become real grown-ups or adults. People about to die can still be very close to their parents, in that they still act out roles from their childhood.

This seems to happen in two ways, according to my current, very fresh and probably limited understanding at this time.

We either take the position as the Child, and act like a child.

Meaning that we affirm our helplessness, our need for outer help. But also that we indulge in defiance (not doing something only because someone wants us to do it), puerile protest, tantrums (screaming, crying, shouting — middle aged people can intensely enjoy being angry at each other), being easily hurt (“how COULD she say something like THAT to ME?!?”) throwing responsibility, restraint and common sense to the winds.

I think acting out our Child can feel like freedom. One kind of  freedom. Maybe abandonment is a better word, being unrestricted, letting it all hang out.

This unrestriction seems double-edged. It can be free as the wind but can also be reactive (dependent on others). Our parents (parent figures) are often present in the picture. It is towards them that we act as a child. They may not be in the room, may even be dead, but they live on as a helping / saving-salvaging / admonishing / scolding / punishing force in the atmosphere of our psyche.

It is to them (present or not) that we turn for help, it is against them we react. In a way we do things because of them, not because of us. If they weren´t there, in some way or form, we would not act like children.

The other position we can take is the Parent. Now the picture is reversed, but possibly it is the same picture, you just move around in it.

Now we are not childish, help-seeking, mad, screaming or rebellious. On the contrary, we are very sober, mature and “adult”.  (Note quotation mark.)

We help out, save the situation, give wise advice, are reliable, understanding and patient. Just as a good parent would be.

So what´s wrong with this? According to Berne, being in the Parent role means that you imitate your parents or do what  you have learned is a “parent thing”. Handy if you have children and act like this towards them.

But real children are not necessary, since other people can be given the role of Child. Not even other people are needed, since all of this can be internal; your Parent advising, scolding your Child. (Or the other way around, your Child rebelling against your Parent.)

Whew, what a mess! But I suppose this is what things are like if viewed through a psychological microscope. We go in and out of roles, taking one position now, another the next minute, towards real parents, real children or surrogate children and parents, outer and inner.

Well, we wouldn´t do it if we on some level didn´t enjoy complication. The whole of creation, I believe, goes from simplicity to complication and then back again. Some of us are moving towards more, some towards less complication.

Which brings us (finally!) to adults.

The Adult in Berne´s system, or let´s forget about dear Berne; I am just speaking of my understanding here. It is what it is, whether I understand Berne correctly or not.

So I would say that the real adult is very much separated from his parents, in the way that matters most. They may be alive, he might have a lot of contact with them, but he is free from imitating them and taking on the role as parent. He also does not feel like a child, has no need to rebel, protest and demonstrate how independent he is. He IS no longer a child, and also no longer feels any compulsion to act like a grown-up, to prove that he is mature.

I think this adult thing might hinge on responsibility. You are ready to carry it (the Child isn´t),  but you feel no compulsion (a key word!) to carry it for others.

Why would I carry somebody else´s burden? Well, I could become a martyr, very altruistic, feel like a “good person”, get the advantage of later being able to say “remember what I did for you back then…?”. I can see a number of attractive, but sneaky, advantages to be gained. So the playing of Parent roles is perhaps nothing strange.

I have probably been too harsh here with the Child. Seem that many very positive impulses come from him. “In the Child reside intuition, creativity and spontaneous drive and enjoyment.” (G.P.P.) Those are very positive forces.

However, when we get stuck in a play not of our (aware) choosing the negative side of Child rears it´s obstinate, defiant head. The other side of the coin.

POSTSCRIPT: These ideas a new to me but already feel like old friends. Not just as a way of thinking but tools for breaking out of a play that I have been tired of a long time.

One confusion is between Adult and Parent. I think what is absent with the Adult is the need to make somebody a Child. How can I feel like a Parent when there are no Children around, just people?

Maybe I am just excusing me, or maybe this is how it actually is: Doing the Parent-Child dance on the level of social criticism is perhaps the best use you can put it to.